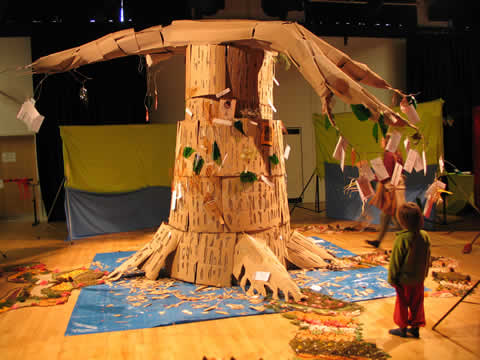 The creation of something new is not accomplished by the intellect but by the play instinct. Carl Jung

Art enables us to find ourselves and lose ourselves at the same time. Andrew Merton

There is a politic to this work. It was the end of a puppet-making workshop, in a school classroom, a long time ago. Everyone had gone except my colleague, myself and one young boy. The young boy, maybe 10 years old, clearly had something on his mind.

“Did you want to ask us something?” I asked him.

“I was just wondering what qualifications you need to do this job that you are doing?” He responded.

“Well we haven’t got actual qualifications to run a puppet workshop but…” I didn’t get a chance to finish.

The boy threw both of his arms into the air like a footballer scoring a crucial goal in a cup final. “Yessss!” He shouted as he ran off towards the playground to join his mates.

All human actions are political. Why? Because everything we do has a cause and an effect. The real question is whether those actions attempt to achieve creative or destructive ends. Of course, this is not a simple question because we are inseparably involved in each other and the universe around us and this means our autonomy is always a relative thing. Any action can have unintended results and we can’t be sure of the causes always of why we do what we do or even why we are whom we are. But, we humans have a several resources we can draw upon. In terms of creative political action the human resource I have always been interested is the imagination. And the people that I wanted to work with were young people.

This motivation began when I was at school. I was doing ‘A’ levels in economics, geography and mathematics. My reading though had very little to do with any of those subjects. I was reading all sorts of novels and about progressive education. This reading fuelled me and I began to argue in class, but not about the subject matter at hand. I argued about the nature of the classroom and the way we were taught. I was probably encouraged to do this by the openness of a particular economics teacher who liked his students to think for themselves. The other encouragements were the optimistic burgeoning youth culture of the early 70s and my age; circumstances that combined to make the future seem boundless and bountiful. I decided that I was going to be an agent to change the education system. Of course, like most dreams it doesn’t quite spin out in the waking world as one first imagines but it is and has been quite astounding where it has led. Here are a few paragraphs on the politics of participatory puppet theatre (and beyond).

The imagination is like a muscle. If you don’t exercise it then it will go flabby. It was clear from early on that the act of giving birth to a puppet captivated people’s imaginations in a very good way. Can I prove this? Not really and neither do I want to because I am talking about captivation not colonisation. Several aspects of captivating the imagination in the circumstance of a puppet workshop are politically positive. And I am going to list them:

This is the politic. It is a positive politic that simply opens up a range of possibilities for a group of people in a collective situation that amplifies power. This power is not the power of domination. It is not power over somebody else but power with others. It is not hierarchical. So this fluid social dynamic has an eleventh effect of changing social dynamics with a group. Especially where a hierarchy has been fixed and therefore the potential for a group to change within itself has become stuck; then this shift to a different sort of experience with each other can have quite a transforming effect. This then opens up the possibilities for individuals to behave and relate differently to both each other and their learning.

There is a certain inseparability involved in a puppet workshop. The puppeteer merge with the puppets they are making. The participants fluidly exchange roles from witness to maker, from performer to audience, between learner and doer and from individual to member of a group. This is not the sort of individualism encouraged by a system that is geared towards economic growth – where participants are trained to be clients and consumers, individuals are groomed to believe that they are making distinct choices when lo and behold they are choosing the same thing. This struck home to me when I was stuck in a traffic jam on the way to a school residency. This was a well to do part of London and the cars stuck in the jam were invariably Mercedes, Lexus and BMWs and most of them were recent number plates. The thing that struck me was preponderance of silver vehicles. So these people, well endowed in spending power, had gone into showrooms to choose a car and by some quirk of fate had all chosen the same colour. Who actually made that so called choice?

I could prittle-prattle on about all this but with 996 tales left to write there’s plenty of time. The boy with the joy at not needing to train to run a puppet workshop hit a nail on the head. I think it was old Ivan Illich who said something like most of what we learn is not taught. And old John Holt who said something like if we learnt to speak like we learn to read and write then not many of us would learn to talk. In the workshop situation the learning is coming from a lot of sources – the other participants, through relationship with materials, past workshops, motivation to create, from the facilitator and from the uncertainty of what will emerge – the outcomes are not being fixed but being drawn out from the participant’s relationship with the imagination. The boy with the joy helped me recognise that although some things we do require training; other learning is drawn out from our innate resource to imagine, particularly in the company of others. I never did change the education system. I have ended up working in hundreds of schools with hundred of thousands of children, and never in a conventional classroom way. I am an agent of imagination. 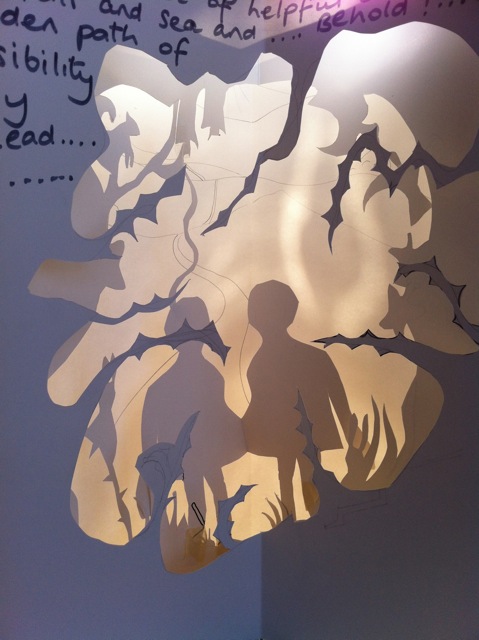 Not many years ago I began to play the cello. Most people would say that what I am doing is “learning to play” the cello. But these words carry into our minds the strange idea that there exist two very different processes: (1) learning to play the cello; and (2) playing the cello. They imply that I will do the first until I have completed it, at which point I will stop the first process and begin the second. In short, I will go on “learning to play” until I have “learned to play” and then I will begin to play. Of course, this is nonsense. There are not two processes, but one. We learn to do something by doing it. John Holt