Some time ago a book arrived in the post. The book was Carlos Castaneda’s “The Other Side of Infinity.” It was from somebody whom I’d only met once and so it took me a bit of time to solve the mystery of the book’s source. The opening of the book hit a chord with me. This piece was entitled ”Syntax”. Syntax is the structure of a language – how phrases and sentences are formed. For example, in English a typical sentence is formed from subject, verb, object – the cat, sat on, the mat. Castaneda’s piece was about origins. He had written two versions that looked at different approaches that arise from different possibilities of linguistic expression. One was about the idea of single origin and the Big Bang.

“The universe began,
and it is getting old, the man assured us,
and it will die, like all things die,
like he himself died after confirming mathematically
the syntax of his mother tongue”

The other version postulated different expressions and possibilities; a different syntax – as indeed there are in the languages of different cultures from around the world.

“There are other syntaxes.
There is one, for example, which demands that varieties
of intensity be taken as facts.
In that syntax nothing begins and nothing ends;
thus birth is not a clean, clear-cut event,
but a specific type of intensity,
and so is maturation, and so is death.”

Maybe it was the nature of this unexpected act of generosity, but this idea of different versions of syntax has played in my mind ever since. The other day a friend and I were talking around the idea of not feeling good enough and how torturous that feeling is for so many people in our society.  Often in workshops I have run, particularly with adults, people walk about admiring each other’s work and denigrating their own. I have often ended up saying, “Look, you can’t all have made the worst!”

After Patrick and I stopped working together as Little Jest Puppets, my workshop practice began to develop. One reason for this was the evident magic, and I am not using that word as hyperbole because it is a sort of human magic, which occurs when people make puppets in workshops. Recently, a child being asked what it felt like said, “I felt more than happy.” Ever since we started running puppet making workshops the obvious love for the activity by the participants has lit up rooms – rooms that sometimes are enveloped in an unnecessary gloom. So what is going on? Clearly, it’s more than what is visible to the eye that goes deep into the soul of these makers. I have noticed a lot of things over the years (which will no doubt leak out into other episodes of this blog). This particular blog episode is about a small, personal realisation about syntax. During my recent chat with a friend about the ‘not good enough’ syndrome, a penny dropped. Although we are bound to say, “I made a puppet”. “I made a puppet” does not tell the story of the experience. 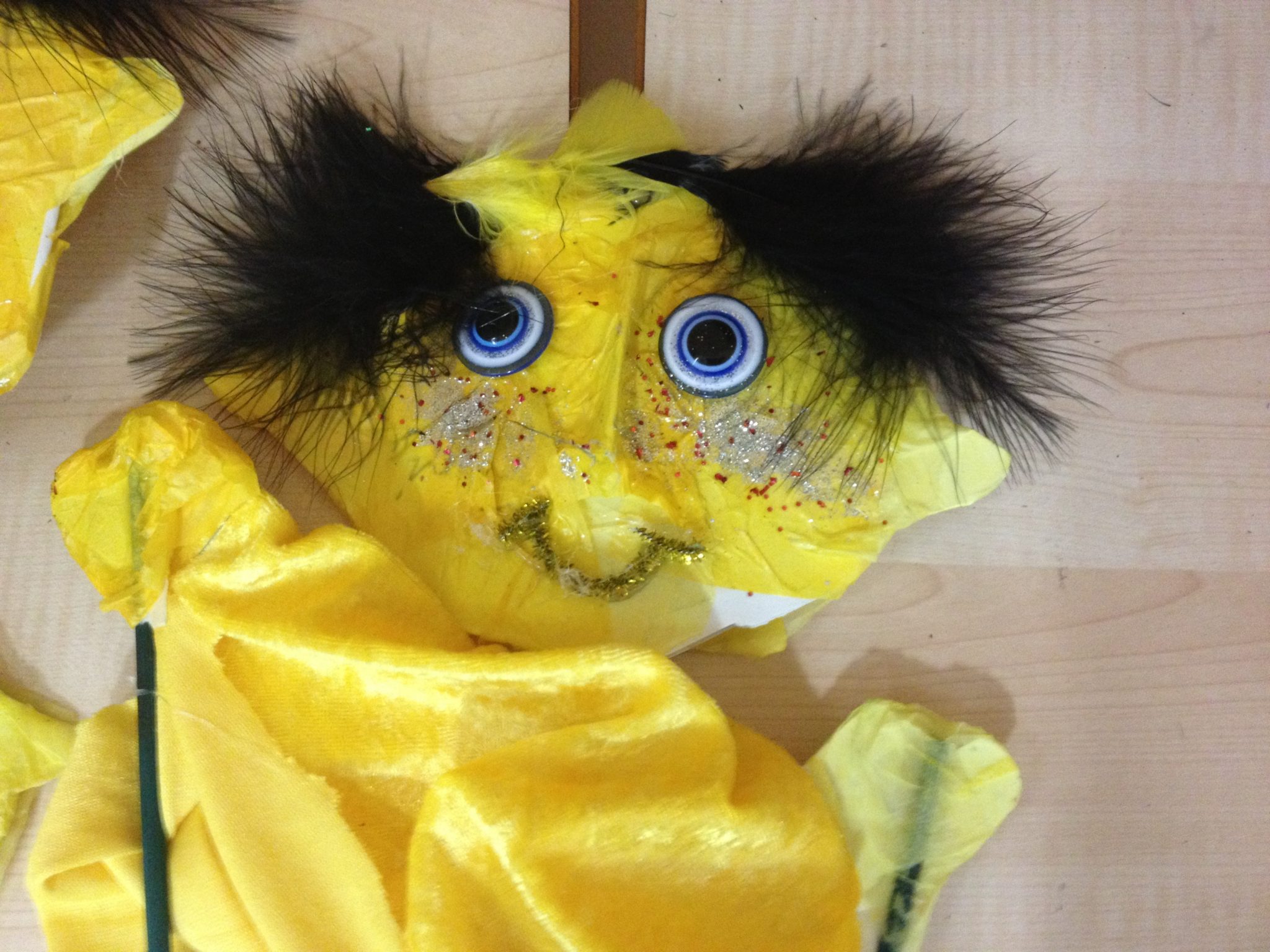 When you see a group of kid’s work, you suddenly realise that actually the imagination is this limitless store, indefinable store, ultimately of endless unlimited invention, mysterious, indefinable which is the common source of all imaginative product and we as individuals have intercourse with that in a funny way and out of that experience we have the gnosis of making something.   John Moat. The Workshop Interviews (these will spill into the blogs later too!).

When Patrick and I were making Queen of May about thirty something years ago, I remember running excitedly around our house with chicken wire on a stick. I ran up to my wife and expected her to be amazed by the hare puppet I was making. Instead, to my utter disbelief, she said, “What is it?” I could see a hare so clearly in my chicken wire that it confounded understanding that it was not obviously a hare. Of course, it would be unlikely that anyone else in the world could have seen the hare that I could imagine so clearly that the chicken wire and the stick were already the hare that they were to become. The same phenomenon is evident when I am guiding a room of people to make puppets. As soon as a head goes onto a stick the nascent puppets begin conversation with each other and the makers start standing back from their creations to admire the near nothing they have made so far. Is the who (person) making the what (puppet) or is the what making the who? Of course, caught up in the structure of our language it seems obvious that it is a one-way relationship but it is not.

I shall give a brief run down of what I see when I watch somebody make a simple rod puppet. The first steps of forming the basic shape of the head can tend to be a bit quizzical either because of worry about doing it right or just getting used to the newness of the material and the inherent uncertainty of not knowing how things will turn out. This first step complete, the makers have pretty much all entered into a state of identifying with a piece of cardboard or a ball of newspaper. It is immediately theirs. But this is not just a question of ownership. This is the beginning of their creative process so this is a question of identity. As they fix that embryonic head onto a stick something is coming to life and the relationship between puppet and maker is apparent. The makers lose themselves, albeit for a moment, into the process of making and a transaction unfolds between person and puppet. The maker will continue to make ‘choices’ about what they connect to the head to create features that appeal to them until the creation is complete with colour, hair, eyes, cloth body, moveable head and hands. And just like each word emerges and forms these sentences from the store of my imagination, or as Shakespeare put it, “from airy nothing”, and manifests itself line by line into this piece of writing; so the shape, colour, form and personality is a fluid to-and froing between the materials provided, the feelings, skills and sensibilities of the person and the coming-to-life of the puppet. All these assembled bits and pieces of a whole puppet arise from the imagination and, in the words of The Bard, “take local habitation and a name”. It can be a deeply affecting experience, even transformational to make something with your hands that you could not imagine before you started which then comes to life in a completely unexpected way through your remembered artfulness and creativity. The process moves people. They are not in the same state as they were when they walked into the room. Where there was just you, there is you and the puppet that you could not have imagined before it became the character that you can animate. 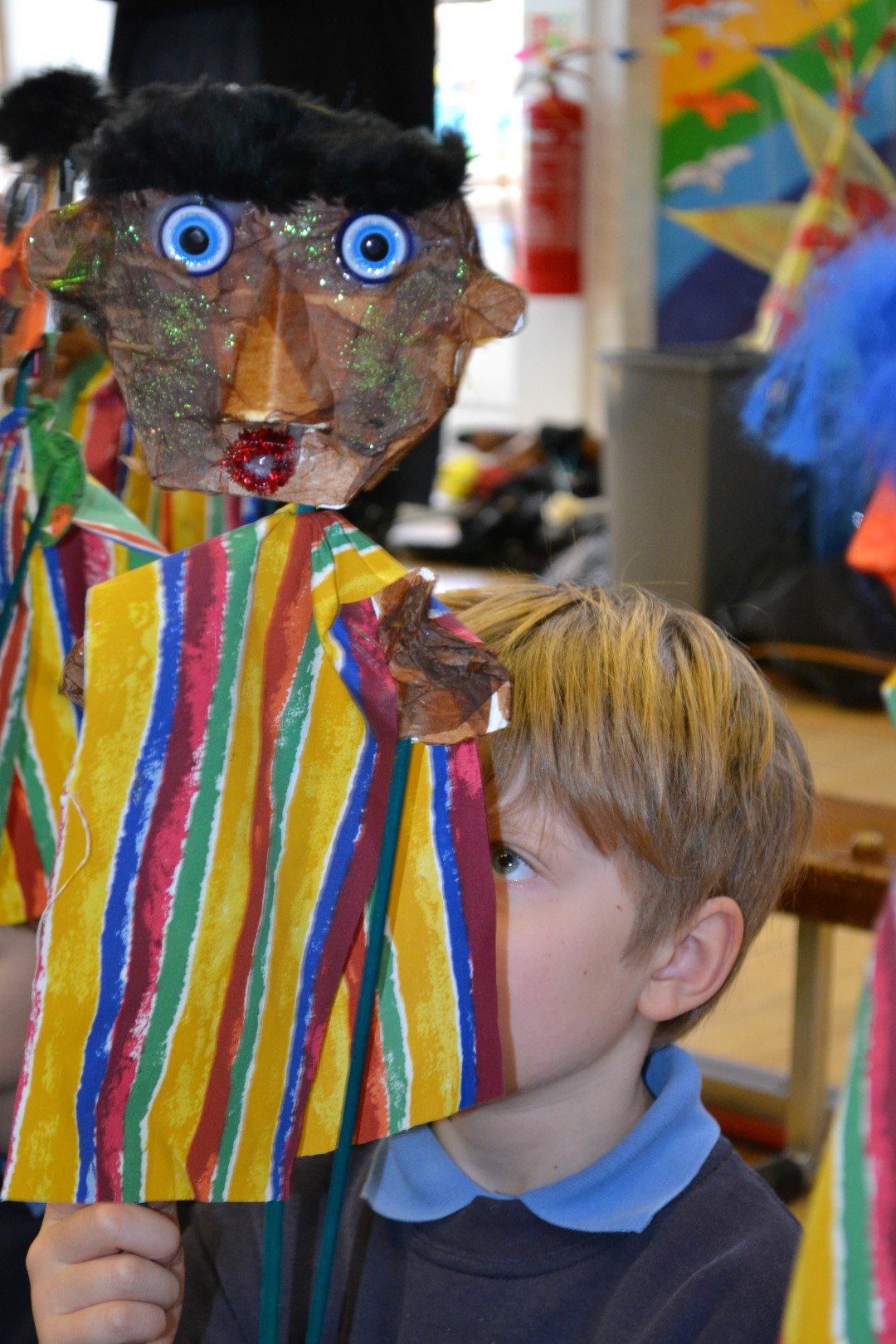 So, if for one moment we forget the ‘I make a puppet’ formulation and go into the immersion of the experience then we can notice that the puppet is to some extent making itself through you. And the puppet is making you as far as the experience leaves you changed. And for the time that you live through that experience there are moments when you are non-reflective, not aware of any separation between you and the cardboard being that you give features to as it adopts a character and expresses some aspect of you. In that time you are the puppet. It is like Castaneda writes about syntax. There is a view that imagines a single point of origin and another that imagines moments of various intensities. It is not either/or but both. It will be your puppet when you make it but that is not all that happens in the act of making the puppet.  This act of being maker allows you to prospect into the deep waters of your imagination and gives you and your expression a specific shape. Subject and object merge in the intensity of a creative experience.

How can we know the dancer from the dance?