We must remember that our shows are just our little jest in the world. Conviction before technique. Our aim is technical adequacy and magical moments;  and a good story, well told. The Little Jest Way.

The sudden appearance of my new heroine, Scheherazade, who arose out-of-the-blue to inform this blog as if she had emerged mystically from the smog that envelops Santiago on winter mornings and obscures the snow capped peaks and then lifts to reveal the majestic Andes has given me permission to write to my hearts content. And that unexpected entrance has coincided with an exit. Today this Chilean journey ends, at least geographically. The journey will live it’s own life in my heart and mind well beyond my arrival home.

I began the story of another journey that began in a puppet theatre world. A modern myth that re-imagined conditions in 1970’s Santiago in the show ‘El Tomate y El Condor’ and my story continued into a workshop space that is now at Italian kitchen. As we get close to leaving Chile on the 26th day , it strikes me that the span from Teatro Travesura to moving to Totnes, forming Little Jest and the end of Little Jest was less than 5 years. Those two moments though were so formative and intense that they crystallise in my heart and mind in a way that seems a lot more than the relatively brief period in my total working life that they occupied in measurable time. There are two times. They are distinct – calendar time passed and experiential impact that endures and continues to unfold.

The world of outcome and output tries to measure experiential impact even before the experience ends. The experience of our Chilean odyssey moves me. Any attempt to measure in now in the plane flying over the Atacama Desert where only a few days ago we were cycling around the stupendous Valle de La Luna ( Valley of the Moon) would be futile, arbitrary and superficial. The whole event of the last 26 days of new and unexpected experience has barely begun the process of scribing meaning into memory. It will take it’s own time to crystallise. A time that bears little relationship to the too short moment between June 15th 2018 and July 10th 2018. Everything that shone and glinted in the winter light between those dates is just beginning to be born.

Maybe it was at a similar point in the year in the summer light in Totnes, thirty- three years ago that a journey still giving birth began. In our back room workshop , Patrick and I spent three days working on our first participatory workshop. By the we had produced our first show, Child of the Wood – the first of a trilogy of shows that drew from the Robin Hood legends. We researched these shows rigorously – looking at the legends from all sorts of source material and different angles. We looked for ways to tell stories with puppets that might not be conveyed by simply storytelling the tales. At the core of creative motivation was to use the Robin Hood legends as a vessel to deal with themes that were relevant to our young audience. Child of the Wood was about overcoming fear. The Queen of May was about magic and the seasons and, our most complex and ultimately our last show, The Last Wolf, parallel Robin’s last days with the extinction of the wolf in England. We were rigorous about every aspect of the show : puppet making, plotting, writing, scenery, music, staging …everything.Everything mattered in our little jest to the world.

We decided that having the offer of a workshop would be a good package for schools. We wanted to apply the same principles of rigour and imagination that turned our creative space into a cauldron of endless heated discussions devoted to finding the right solutions. We wanted to make something special. So we spent three days on devising the Little Jest workshop. Those three days have now served me for thirty three years.

Our strength and weakness as a partnership was that although we worked without limits on our shows. We were untrained, at least in any formal sense. And we had to invent each mechanism and joint of each puppet construction as well as the sculptural process. We made large rod puppets that we worked in full view of the audience with all the dramatic conviction we could draw upon. But those puppets took us weeks to make and used chicken wire, wallpaper glue and so much toilet paper that we used to think we should seek sponsorship from Andrex. He could we transmit this unwieldy but successful making process to children?

Our criteria was that we wanted the children to make something amazing – puppets that exceeded expectations and lasted. We invented three models – a fish, a bird and a person. They were all rod puppets made from recycled materials and decorated with coloured tissue paper. The big question was how to attach the card to the rod. Patrick came up with a brilliant solution – paperclips! The paper clip, used the right way, fitted perfectly over the canes we used. So perfectly that one could imagine that the person who invented the paperclip may have lived next door to the person who invented the green garden cane. This technique and those models not only have now been employed to make well over one hundred thousand puppets but also provided the basis for me to develop and develop and develop a practice that just keeps offering up new possibilities. It was, and is, the proverbial gift that keeps on giving.

The full circle from Teatro Traversura to visiting Santiago and Little Jest events where there is now an Italian eatery reverberate, reveal, realise and resonate because of the intensity of the new; because of friendships; and because in ways that I was unconscious of until they happened, I needed them to happen in my life. I am home again now from another journey. 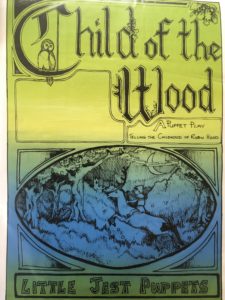 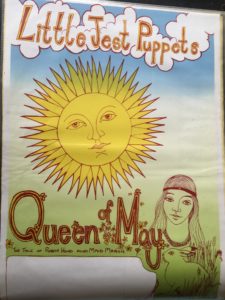 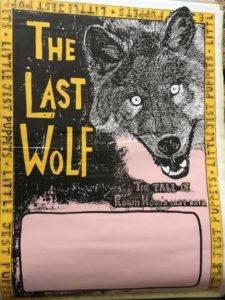