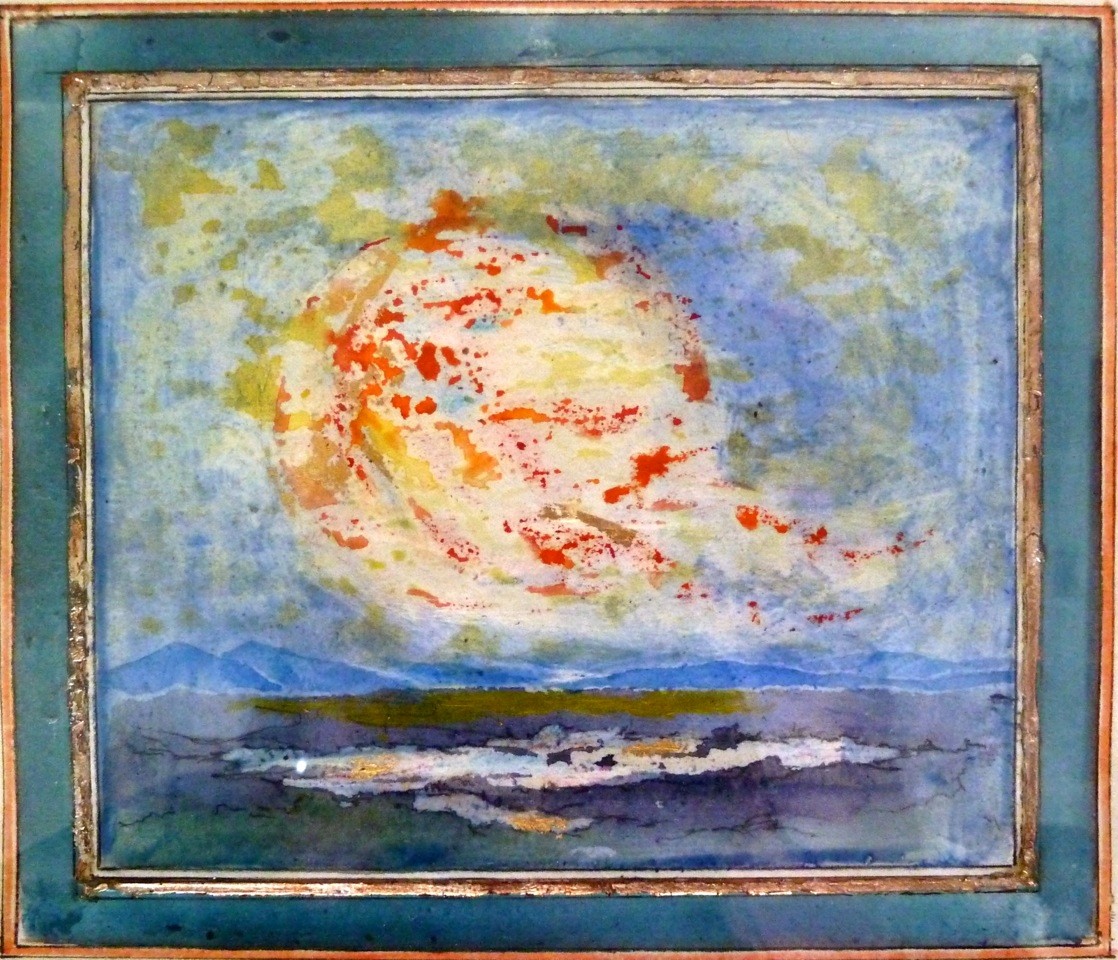 There’s a marvellous passage in Don Quixote. Don Quixote goes into the studio of a painter and the painter is standing in front of his painting which he is working on and Don Quixote says to him, “What’s that you’re painting?” The painter stands back from it and looks at it with a sort of curious lack of understanding and says, “That is as it may turn out to be.” This is the core of creativity – by creating, by the gnosis of actually making something we finally know who we are. The big contribution that we can make to anything is making ourselves. John Moat

This blog is a chronological leap. It jumps from a day ago into a time some fifteen years ago. In fact it jumps all over the place. I remember my old friend, John Moat, in a time not long before he died, telling me how so many of the lost ideas and thoughts he had seemed to be connecting. He told me that even when old ideas seemed lost that they somehow reappeared and began to form a thread. And sometimes when old ideas reappear they adopt a new guise.

I used to visit John quite regularly for our chats about workshop, the imagination and creative directions. It was a most splendid arrangement from my point of view and supported me immensely in developing my work. This is how it happened.

Nearly thirty years ago, the thread of a story began to unwind. In fact it was probably much longer than that, but I can say that’s when I began to recognise a story unwinding in front of me. The indelible mark of the pointed finger of a good question touched my head. The question launched me on a quest. It instantly entered regions of my skull that are sometimes called brain or mind. I was in rural England and in the midst of 120 children who had just made puppets and performed their version of a West African tale. As I saw the undiluted joy of these children at their achievement, I found myself looking at faces that radiated light like luminous orbs in their school hall. I asked myself, “What just happened? And as I searched through the process of the last week, one word stood out: Workshop. It was a workshop. That was what had just happened. And then the question finger touched me! But, “What is Workshop?”

I concluded on the spot, well in the van, that workshop was a form – a way of practicing art in its own right like music or theatre or dance. Workshop has its own specific qualities. I decided to write a book on the form ‘Workshop’. And being a constant prey to my own naivety, I rang up Faber the publishers. So a naïve man, who had just had an idea because a question finger touched him on the head, was put through to the theatre editor. Of course, I was stumped by the question, “What’s your book about?” My conviction wasn’t shaken but it was stirred. I had commitment to an idea or rather, an idea had committed me to a course of action and from there positive coincidences and new opportunities seemed to fall over themselves to draw me into new worlds.

I was at some conference or gathering of artists or the suchlike, somewhere or other, and it was time for coffee and biscuits. I found myself chatting to a woman who, to my surprise seemed very interested in my ideas about Workshop. She invited me to visit her for a further chat in her office at the London headquarters of the Arts Council in London. How times have changed! I rolled up there to find I was chatting to the person in charge of research and development. After a long chat she said that if I wrote my ideas down she would give me a grant to investigate my ideas. Amongst the many results of that chat, was a series of interviews with artists on the question: What is Workshop?

Someone somewhere or other said I should really make a point of talking to John Moat, who along with his friend John Fairfax and the help of his friend Ted Hughes and his partner Antoinette (partners so often being the invisible and essential part of an enterprise), set up the Arvon Foundation. The Arvon Foundation provided a week –long residential workshop for would-be and practicing writers, disaffected youth and all sorts to work on their writing under the guidance of writers. I bought a small mini-disc recorder and set off on my interviews. And so I met John Moat and a friendship began. John held a lot of store, quite rightly, in what his friend Fairfax had called “the efficiency of friendship”. After the interview John invited me back for more chats. So every so often I trundled across the county to the old mill where he lived and we ate, supped and chatted. Now lets jump in time again.

Rats ate my summerhouse. The cheapo-cheapo production in which I did end up writing that book. Last year I decided that it was time to build another one. This one had to be absolutely rat-proof. I researched log cabins and I thought I had located the ideal solution – a self-build, bespoke kit of good thick tongue and groove spruce and double-glazed window and door. And, most important, it was affordable. I placed the order and very soon afterwards, before breakfast on a crisp and cold morning, there was an assertive ring on our doorbell. There stood a ginger-haired young giant sporting shorts that paid no heed to the low temperature and who, with convivial enthusiasm, asked, “Where do you want me to put it?” A large pile of wood slats, and the necessary accessories were deposited in our garden and we were told that the instructions are on-line. Well there are whole universes of instructions on-line but specific instructions for this cabin were not among them. There were some very approximate guide videos and instructions for cabins that were much grander than the embryonic pile that was squatting in our garden to make my two-metre square new writing shed. Ah yes, the efficiency of friendship!

What do architects who are passionate about architecture do when they retire? The one down the road started to redesign and rebuild his home. On finding myself baffled by aspects of the cabin kit and needing some help with the base, I sought his advice. He did a lot more than advise me. His own self- designed, multi-dimensional, ever expanding in ambition project that he was constructing inside what looked like the shell of his house dwarfed my small cabin kit. So, at moments, his time was at a premium. When he helped me  put the concrete down and lay the base in position came one of those moments when his own project demanded his full attention..

What do bookshop owners do when they retire? It turns out in the case of my old mate who ran the local bookshop they do rather a lot but luckily, not too much to help a friend for a day or two –and so the roof went on. When that unseasonly, be-shorted, ginger giant had deposited our wood he chirpily announced, “Shame you didn’t have it treated. It only costs another £80.” Yes it was a shame but there it was. Now, only the door and window to put in. Well, up to this point the cabin had proceeded at glacial pace. This  being mainly due to the rhythm or lack of my show-producing, workshopping, project to project existence. The door and the window were still not inserted. The gaps where they should have been were beginning to yawn at my non-activity. When some builders offered, “we’ll bung those in for you.” I couldn’t take looking at the accusing yawning gapes in my cabin anymore and so took them up on their offer. Problem was that’s just what they did. They bunged the door and the window in. It was only when I got to treat the wood that I noticed daylight was knifing through once snug tongue and groove fittings. On consultation with my architect friend, it was decided the only option was to take the door and window out and fit them properly. At which point a third friend stood in. A relatively new neighbour who likes to make things and solve practical problems.  He cut the necessary chunks out of both frames and both apertures now fitted properly. So, with the immense help of three friends and several months later, the cabin was snug. The cabin is small, the endeavour though was epic. The small cabin had to have a name that reflected in some way the acts of generosity and its function as a place to go and write.

I was stumped. What possible name was there? There is very little routine in our changeable lives but, when possible, one routine is a leisurely Saturday breakfast with a newspaper on the sofa. Claire interrupted me from my immersion in the sport section, “Listen to this!” And this is what she read to me as a quote from an interview with the author Pat Barker:

The book that had the greatest influence on me
The Way to Write: A Complete Guide to the Basic Skills of Good          Writing by John Fairfax and John Moat – simple advice for beginners     that takes an hour to read and the rest of your life to implement.

I was jolted into a sense of loss of a great friend and my mentor and other happier memories of our enlightening chats in John’s studio. One day in one of these chats John handed me a folder and said, “Tony, see what you can make of this.” The folder contained sketches and jotted notes about a project that John had envisaged as ‘a sort of Camelot of Workshops’ . It was marked on the front with a label. That label is now the name of my cabin. Thank you John and the epic three who offered their time to me and were my fellow cabin-constructors.

Actually if you see a group of children’s work, you suddenly realise that actually the imagination is this limitless store,  the common source of all imaginative product. And in a funny way, we, as individuals, have intercourse with that common source. Out of experience that involves the imagination we have the gnosis of making something. So there is always this element of  this shared store like the great Jung’s great collective unconscious and there is the other side, which is the individual’s experience of it. John Moat

2 Replies to “Six – The Efficiency of Friendship”